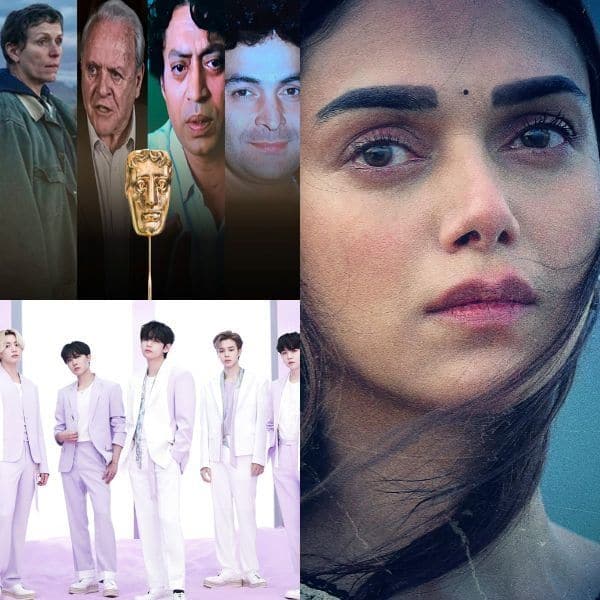 As we bed farewell to another day, it’s time to look back at the biggest newsmakers in the entertainment world who’ve made it to the trending entertainment news today. From the entire list of BAFTA 2021 winners and a new record set by BTS’ Film Out to Aditi Rao Hydari’s first look in Maha Samudram, Tina Datta’s sexy swimsuit photoshoot and Kartik Aaryan’s new heroine – Bollywood, Hollywood and the South all grabbed headlines to make it to the trending entertainment news today. Also Read – Maha Samudram: Aditi Rao Hydari’s first look in the Sharwanand starrer leaves us expecting another ‘RX 100’ styled twist from Director Ajay Bhupathi

So, without further ado, here are the entertainment newsmakers of 13th April 2021:

The 74th British Academy Film And Television Awards were presented by Priyanka Chopra Jonas, Hugh Grant, Tom Hiddleston and Gugu Mbatha-Raw, and the ‘In Memorium’ segment in particular, which included Irrfan Khan and Rishi Kapoor, left everyone emotional. Also Read – What to watch on Netflix, Amazon Prime, Hotstar and more OTT platforms in April, May, June 2021 as we tide over the second wave of covid-19

BTS’ Film Out is a part of the soundtrack of the Japanese film, SIGNAL The Movie Cold Case Investigation Unit, where it’s played as part of the finale theme along with J-pop band Back Number.

Read the full story here: Film Out – BTS adds another feather to its cap with its new single; check out the record the K-pop band has achieved

Tina Datta recently conducted a scintillating photoshoot by the poolside in nothing more than a sexy monokini that left little to the imagination. Accompanying her was a delicious looking food tray, assembled with an assortment of snacks.

Kartik Aaryan will reportedly play a cricketer in Sharan Sharma’s sports drama. The film will be bankrolled Karan Johar’s Dharma Productions and will go on floors by the end of 2020.

Read the full story here: Kartik Aaryan to romance THIS young actress in Sharan Sharma’s next? Here’s what we know