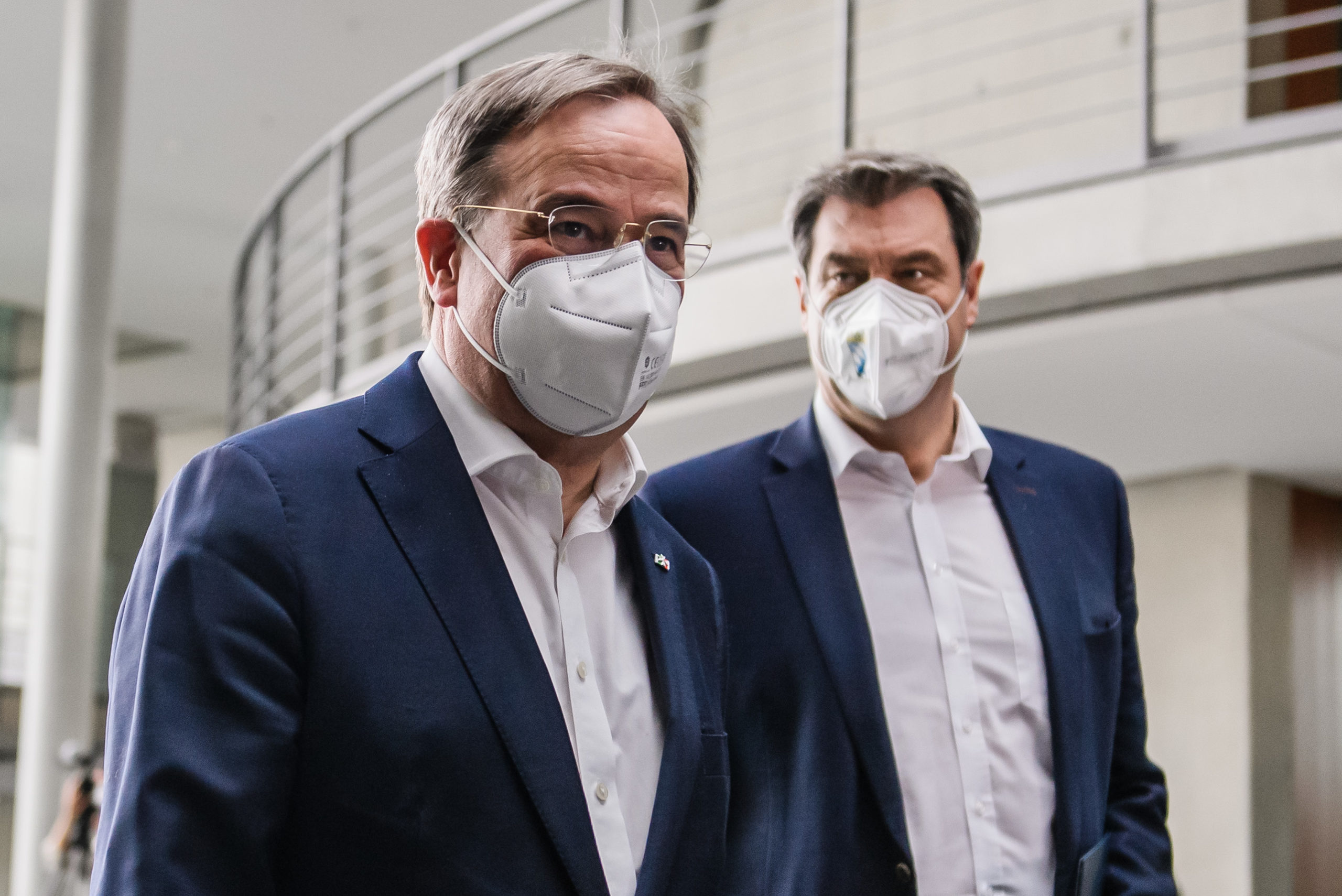 Germany’s governing conservative bloc is heading for a showdown to choose a candidate to succeed Angela Merkel as chancellor, as the leaders of both the CDU and CSU parties announced their willingness to run Sunday.

Speaking at the same press conference, CDU leader Armin Laschet also announced his “willingness to run for chancellor.” He added that both politicians had agreed their parties would decide “very quickly and very promptly” who would be the final candidate. “Our goal is … to achieve as much unity as possible between the CDU and CSU, because there is a lot at stake,” Laschet said. “Europe is watching how Germany develops. The world expects a stable Germany.”

While Söder can count on the backing of his CSU, a lot now depends on whether the CDU throws its weight behind Laschet, who took over as party leader in January and has since suffered from poor popularity ratings. Some may decide to back the Bavarian who enjoys much higher popularity among voters.

Söder acknowledged that the final decision lies with the CDU: “If [my candidacy] is what the party, the parliamentary group and the members want, then it’s clear to me that I can’t back down but must face up to my responsibilities,” he said. “But it’s also clear that if the bigger sister [party] says that this is not her proposal, that she has another proposal … then I would also accept that. We don’t want a split, we want unity.”

The CDU/CSU alliance is facing internal pressure to decide swiftly on a lead candidate for the September 26 election as its poll ratings plummet and the second-placed Green party is set to pick its lead candidate on April 19. Merkel has said she won’t run again in the election.

Support for the CDU/CSU has fallen in opinion polls from 36 percent in January to 27 percent, while the Greens improved their rating from 19 percent to 22 percent over this same time frame.

A decision could come as early as Monday, when the CDU leadership meets. Recent polls suggest that Söder has a good chance to win support from his sister party: A survey by broadcasters RTL and NTV last week suggested that 38 percent of Germans would vote for him as chancellor, ahead of the Greens and the Social Democratic Party, while Laschet would only get 17 percent, risking a CDU/CSU slump to second or even third place in September’s vote.

Another poll by public broadcaster WDR on Sunday showed that even on Laschet’s home turf in North Rhine-Westphalia, where he governs as premier, his popularity ratings collapsed by a staggering 34 percentage points since January to only 26 percent.

In an apparent swipe at Laschet, Söder stressed that “the candidate for chancellor should be the one who has the best chance of being elected.”

In an interview with the BILD am Sonntag weekly published earlier on Sunday, Laschet downplayed his poor popularity ratings and said he had succeeded in bringing the party together since winning the party leadership in January and was “getting a lot of support.”

Laschet also said he stood for continuity with Merkel’s political objectives: “I have been in agreement with the chancellor for years on basic policy issues — from the euro rescue to refugee policy. Even when the conflict with the CSU escalated two years ago over a European refugee policy. Such a rift must never be repeated.”

Those comments were targeted against Söder, who repeatedly rebelled against Merkel’s refugee policy and played a key role in an escalating political fight in June 2018 that threatened to bring the government down.

Speaking about the battle against the coronavirus pandemic, another divisive issue in German politics, Laschet advocated an early halt to age prioritization for vaccination, once the most elderly and vulnerable have received the jab, to allow all interested adults to book an appointment.

“When the big amounts of vaccines come in at the end of the spring, vaccination priorities should drop and vaccination should be opened to everyone,” he said. “That would be an important building block in building the bridge to a summer with a lot more freedom.”