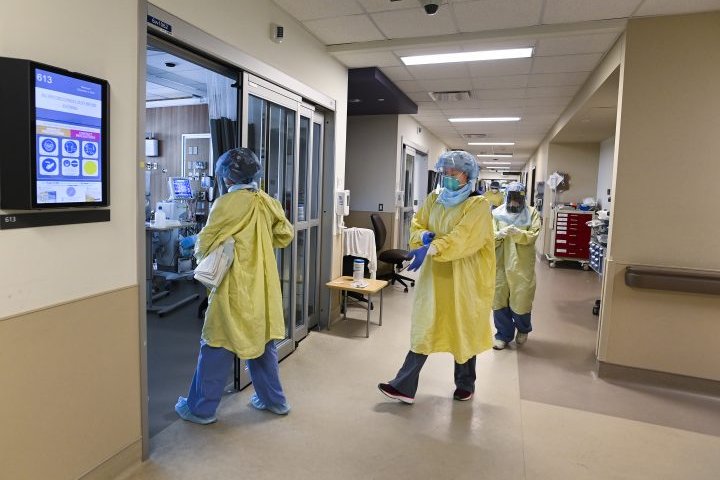 Experts are warning that British Columbia’s recent surge in new COVID-19 cases could see record pressure on B.C.’s hospitals as new variants of concern take hold in the community.

On Friday, B.C. reported 908 new cases of the virus, the second highest daily total yet, and the highest since Nov. 27.

It also recorded more troubling growth in COVID-19 variants of concern, which have have been growing as a proportion of active cases in the province since the start of March.

“With a doubling of the (B.1.1.7 variant first detected in the U.K.) every seven to 10 days, we’re going see a rise in cases. And I think the big concern is that with the greater severity of it, that the one where the models predict increasing load in the hospitals.

“So by the models that I’ve done, by the first couple of weeks of April, we’re going to exceed the numbers in ICU so far in the entire course of this pandemic.”

At the start of March, variants of concern represented just 0.2 per cent of all active COVID-19 cases in the province, a figure that reached over four per cent by Friday.

The U.K. variant, which forms the bulk of the cases identified in B.C., is known to be more transmissible, and recent data suggests it is also more dangerous.

The effects of the P.1 variant, first identified in Brazil, remain unclear, but it is growing rapidly in the province, with cases doubling from March 18 to 23, and again by March 26 to the current 199 reported cases.

On Thursday, provincial health officer Dr. Bonnie Henry said the U.K. variant appeared to increase the risk of severe illness among younger people, adding that about a third of people who are hospitalized with the variant end up in the ICU.

According to public health officials in Ontario, the variant has led to a 60 per cent increase in both risk of death or hospitalization, and a 100 per cent greater risk of admission to intensive care.

The number of COVID-19 patients in B.C. hospitals climbed over 300 this week, a figure last seen in January, while the number of people in the ICU shot up earlier this month before holding in the low 80s.

Recent changes to restrictions, such as those allowing people to gather outside, were a positive step because they give people an incentive to follow the rules in a low risk environment, Conway said.

But the province may need to retool the two other key planks of its COVID-19 strategy if it hopes to contain the surge in new cases currently being driven by younger adults, he said.

“It may be that if cases continue to increase in younger adults, if we see more severe disease in that population, we may employ a strategy that will vaccinate them much sooner, as we have already done in Prince Rupert, for the entire city,” Conway said.

Testing is the other component that needs a rethink, he argued.

Jurisdictions such as Ontario and Alberta have looked at more mass testing as a way to locate and contain the spread of COVID-19, something British Columbia has been reticent to do.

“Not everyone has agreed with that, but we are told we have a capacity to do 20,000 tests per day, we’re doing less than half that. We should really explore in targeted populations the benefits of increased testing as a tool to reduce viral transmission.”

Otto said she expects the new restrictions will be needed to contain the spread, or the province risks facing a “tsunami” of new cases.

“We kind of lost that window of opportunity when the numbers of variants were so small. And so now we’re talking big, massive province-wide restrictions in order to keep it down,” she said, referring to January and February.

-With files from Richard Zussman

How Do I Know if My Teen Is OK?

Telfar's Bag Security Program Is Back For 2021: Details