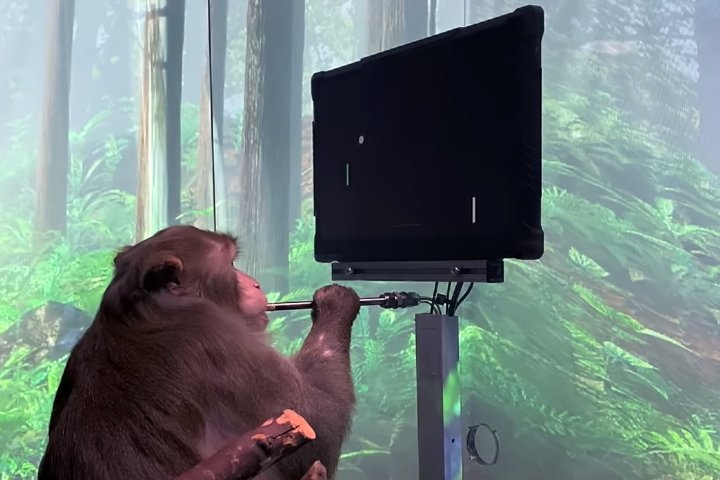 Put enough monkeys in a room with typewriters and they’ll write Shakespeare.

Put one monkey in a room with a Neuralink and he’ll play Pong.

Billionaire inventor Elon Musk has revealed new footage that purportedly shows a monkey playing a video game “with his mind,” thanks to a cutting-edge brain implant known as a Neuralink. The device effectively translates brain signals into instructions for a machine — a science fiction-level achievement that could effectively turn a user into a cyborg.

Read more:
Sea slug found that can lose its head and regrow a whole new body

Musk shared new footage from Neuralink on Thursday that shows the Pong-playing primate in action, some two months after he first announced the achievement. The video was released by the startup, but the results have not been published in a peer-reviewed scientific journal.

The video shows Pager, a 9-year-old macaque, moving the Pong cursor on a screen while sipping a treat out of a straw. The narrator explains that Pager was implanted with two Neuralink chips six weeks prior to the test, and that he was then trained to play the game with a joystick.

Pager initially plays the game using the joystick while the Neuralinks record and decode his brain signals via Bluetooth and smartphone app. The chips learn the brain signals that Pager uses to move his hands, then figure out how to translate those signals directly into a machine, the narrator says.

“The links record from more than 2,000 electrodes implanted in the regions of Pager’s motor cortex that coordinate hand and arm movements,” the narrator says.

The joystick is disconnected for the second part of the test, so that Pager is not actually using it to control the Pong cursor. Instead, the signals he sends to his arm are also going to the machine and moving the Pong cursor directly, according to Neuralink.

Later, Pager stops using the joystick altogether, and instead thinks about moving the cursor while wrapping both hands around the treat straw.

“It’s not magic,” the narrator says. “The reason Neuralink works is because it’s recording and decoding electrical signals from the brain.”

Neuralink’s goal is to translate human brain signals into seamless instructions for a machine, so that people with paralysis can still interact with technology around them. A person with the implant would theoretically be able to send a text message, use a speech synthesizer or even move a robotic limb, according to the Musk-backed startup.

Musk explained on Twitter that the first Neuralink chips “will enable someone with paralysis to use a smartphone with their mind, faster than someone using thumbs.”

He added that later versions “will be able to shunt signals” from Neuralinks in the brain to chips implanted in other nerve clusters in the body, “thus enabling, for example, paraplegics to walk again.”

He also pointed out that the devices are made to be implanted “flush with the skull” so that users don’t have chunks of technology bumping out of their heads. Each chip charges wirelessly, he says. No details about the monkey’s health were released.

The video ends with a call for help with the project, as there are still many “challenges” and tests ahead.

Perhaps the next test should involve a game of Donkey Kong?