European elections to watch in 2021 – ClixkPlayNews 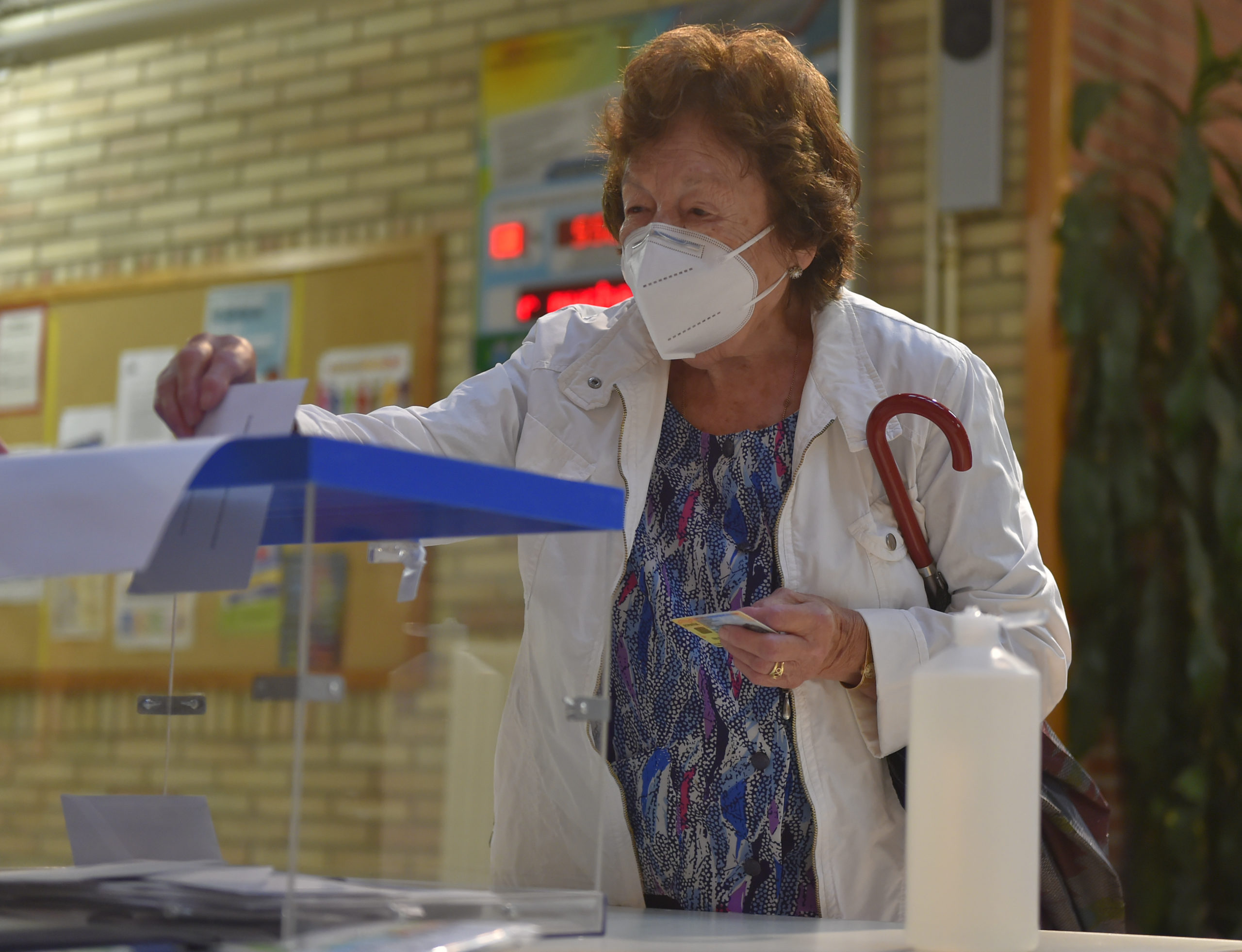 Voters are set to cast their ballots across Europe in 2021 in elections that have the potential to shake up the Continent’s political landscape as it emerges from a year marked by the coronavirus crisis.

The pandemic could continue to disrupt the votes ahead, as it did in 2020, but some things are still certain: Angela Merkel, the long-time leader of Germany and in many ways Europe, is set to step down, while other top politicians face what will essentially be referendums on their leadership during the pandemic.

Here’s ClixkPlayNews’s guide to the key votes this year (with their expected dates).

What’s at stake: Polls give the center-right incumbent Marcelo Rebelo de Sousa more than 60 percent support, enough to win. Still, his two closest contenders are attracting a lot of media attention: Socialist former MEP Ana Gomes and far-right upstart André Ventura, who founded the party Chega (meaning “enough”) only in 2019. How well Ventura performs in the election will be an indicator of support for the far right, which until recently has not been a major force in Portugal. Gomes is currently polling at around 13 percent and Ventura 10 percent.

What’s at stake: Prime Minister Mark Rutte has faced international scrutiny for initially opting to avoid strict coronavirus lockdowns like his neighbors, instead advocating for a so-called “intelligent lockdown,” which didn’t restrict people from going outside. But while this softer approach proved popular at home, where his party surged in the polls, Rutte has since relented and imposed tougher measures, most recently with a total shutdown of shops and schools that will last until at least mid-January. The prime minister and his center-right allies will be hoping this popularity translates into regaining their majority in the House of Representatives this election, which they lost in 2019 when one member was expelled — the same year the bloc also lost its majority in the Senate.

Who to watch: Rutte, one of Europe’s longest-serving leaders, has said he’s running for a fourth term. His People’s Party for Freedom and Democracy (VVD) is leading in the polls with around 37 percent support — a nearly 17 percentage point jump from its results in the 2017 race. Last time, fragmented results meant coalition talks stretched for months with multiple failed attempts at forming a government. The VVD ultimately had to cobble together a slim majority with three other parties: the conservative Christian Democratic Appeal, the social-liberal D66 and the conservative-green Christian Union. The VVD may have an easier time forming a coalition this time.

Another thing to watch is the country’s far-right parties: The Forum for Democracy party emerged on the political stage in 2016 and scored big in the 2019 provincial elections and the European Parliament election the same year. But the party’s popularity has dropped in recent months amid a long-running racism row and power struggle that saw many prominent members jump ship. The more established far-right Party for Freedom, under Geert Wilders, has meanwhile shot up in popularity, currently second to Rutte’s VVD at around 25 percent.

What’s at stake: Bulgaria’s parliamentary election will come after months of anti-government protests calling for Prime Minister Boyko Borissov to resign over corruption allegations and the opaque ties between the government, oligarchs, the judiciary and security services. Other than a Cabinet reshuffle, Borissov has refused to budge, instead stirring up fear about the prospect of his socialist opponents taking power.

There’s more at stake in this vote than just for Bulgaria: To ensure support from a small nationalistic party in his ruling coalition, Borissov has laid an obstacle in front of North Macedonia’s path to EU membership, pressing Skopje to acknowledge Sofia’s view that the language spoken in North Macedonia is a regional dialect of Bulgarian.

There’s also a presidential election later in the year, expected in the fall. No candidates have yet declared, but the socialist-aligned incumbent Rumen Radev — who has faced off against Borissov amid the protests — is eligible for reelection.

Who to watch: It remains to be seen whether any new coalition emerges in the parliamentary race after the unrest in 2020 but for now, Borissov’s ruling Citizens for European Development of Bulgaria (GERB) party is leading in the polls with 28 percent of support. The Socialist Party, headed by Korneliya Ninova, is polling second to Borissov’s group at around 25 percent. To deflect blame amid the protests, Borissov has focused attention on the socialists’ own corruption scandals and failure to combat organized crime, which limited Bulgaria’s access to EU funds in 2008. GERB also accuses the socialists of close ties to the Kremlin, although Borissov has also enjoyed cozy relations with Moscow.

No candidates have been officially declared for the presidential race, but Borissov several years ago had mulled a presidential run. That could mean facing off against his bitter rival, Radev, who seized upon the 2020 protests as a chance to try to break Borissov’s grip on the state.

What’s at stake: The parliamentary race in Scotland will be one to watch in particular: First Minister Nicola Sturgeon has said she will campaign for a mandate to hold a vote on independence, paving the way for a showdown with Prime Minister Boris Johnson’s government. Scotland voted to remain in the U.K. by a margin of 55 percent to 45 percent in a 2014 independence referendum, but Sturgeon reckons Scottish discontent over Brexit and growing support for secession will lead to a different outcome.

There are also votes set for the Welsh parliament, local English councils and a number of directly elected mayors in England.

Who to watch: Sturgeon’s Scottish National Party is currently polling far ahead of all others, with 54 percent for the constituency seat vote and 43 percent for the regional list vote.

In Wales, Labour’s Mark Drakeford is running for re-election as first minister, though he has said he doesn’t intend to serve all of the next term if he wins. Drakeford has sought to set himself apart from Johnson on his handling of the coronavirus crisis with tougher restrictions, which is likely to come up in campaigning.

London will hold its mayoral race in May as well, after being postponed a year due to the pandemic. The Labour Party’s Sadiq Khan is seeking reelection, and looks to be the favorite to win. His Conservative rival Shaun Bailey is in second place in the polls and has been trying to close that gap, but still trails behind by around 20 percentage points.

What’s at stake: The exact election date is still up in the air after the government proposed pushing it back from March to June 2021 due to the pandemic to avoid a repeat of 2020’s disrupted municipal elections. These will be the first regional and departmental votes since President Emmanuel Macron launched his centrist La République En Marche movement in 2016. It will therefore offer a snapshot of the party’s support ahead of the 2022 presidential race — amid the devastating effects of the coronavirus on the country, which has been among the worst-hit in Europe.

Who to watch: Macron’s LREM faces an uphill battle, given the strong ties more established parties have in the 13 mainland administrative regions. One person to watch is Xavier Bertrand, a former member of the conservative Les Républicains and incumbent president of the regional council of Hauts-de-France, France’s northernmost region. Bertrand has expressed interest in challenging Macron in the 2022 presidential race, and winning reelection could make him the “natural” candidate his former party has said it’s been looking for.

Macron’s party is yet to reveal its list of lead candidates, which could include members of the president’s own Cabinet, like Education Minister Jean-Michel Blanquer for Île-de-France.

It’s also worth keeping an eye on the Greens, who are hoping to repeat the wave of success they had in the 2020 local elections, especially in Nouvelle-Aquitaine, France’s largest administrative region. The Greens took over the region’s capital Bordeaux in 2020.

What’s at stake: This will be the first election in which Angela Merkel is not running for chancellor since 2005. The longstanding leader is preparing for retirement and has repeatedly insisted she won’t seek another political role. Who will fill her shoes is the big question, not only for Germany but also for Europe, where she has long been seen as the Continent’s most powerful leader and standard-bearer.

Who to watch: Merkel’s current junior coalition partners, the Social Democrats (SPD), are the only ones so far to declare a chancellor candidate: Finance Minister Olaf Scholz.

A leadership race to determine the next head of Merkel’s Christian Democratic Union — and therefore the party’s likely chancellor candidate — has been postponed twice due to the pandemic and is currently set for January 15-16. Three candidates are in the running: Armin Laschet, the premier of the state of North Rhine-Westphalia; Norbert Röttgen, who chairs the Bundestag’s foreign affairs committee; and corporate lawyer Friedrich Merz.

Someone else to watch is Markus Söder, the leader of Bavaria and of Merkel’s sister party, the CSU, which traditionally runs a common chancellor candidate with the larger CDU. He’s received particularly high marks for his handling of the coronavirus crisis in his state and there’s great speculation he could run to succeed Merkel, though he has insisted this isn’t his ambition. If he did have his eye on the chancellorship, his biggest challenge would be convincing the CDU.

The Greens will also be a party to watch: It’s currently among the smallest parties in the Bundestag, but its support has shot up since the last election, putting it in second place in opinion polls, behind Merkel’s CDU and above the SPD in third. The Greens have never formed a coalition with the CDU at the federal level, and were last in government with the SPD under Gerhard Schröder, Merkel’s predecessor.

What’s at stake: Prime Minister Andrej Babiš is seeking another term after taking office in 2017. Babiš leads a minority government with the junior Social Democratic Party and support from the Communist Party, but his ANO party doesn’t look set to increase its power: Polls show ANO losing votes compared to the last election at 27 percent compared to 29.6 percent.

Babiš has faced a rocky first term, with historically large anti-government protests calling for his resignation in 2019, and coronavirus blunders: The health minister was forced to resign in October after being photographed breaking his own rules, and Babiš also faced criticism for vacationing in Crete over the summer while urging Czechs to stay home.

Who to watch: Three center-right parties — the Civic Democrats, Christian Democrats and TOP 09 — banded together in 2020 to form an alliance against Babiš, called Let’s Go Into It Together (SPOLU), under Petr Fiala. “We want to give people hope that populism, empty words and lies will not rule this country,” Fiala said at the time. Together they’re polling at 20 percent, behind ANO at 27 percent. Ivan Bartoš’s Pirate Party has also gained ground since the last election, now at 17 percent compared to its prior 10.8 percent.

Other elections coming up in Europe (expected dates):

Eligible To Be Inoculated Monday, Some Medical Workers Perplexed By Lack Of Guidance From NYS – CBS New York