The popular K-pop band BTS has become a global phenomenon and we saw every band member garnering a huge fanbase across the world. And among them is Mr. Worldwide Handsome Jin, who is also known as Worldwide Superstar. While we are waiting for the next album of the Bangtan Boys, fans want Jin to collaborate with Taylor Swift. Billboard magazine recently conducted a poll and asked fans who should collaborate with the Love Story singer and we saw Jin winning the poll by a huge margin. While Selena Gomez grabbed the second spot, Katy Perry and BLACKPINK came fourth and fifth. Also Read – Do you know what BTS members nicknames are? 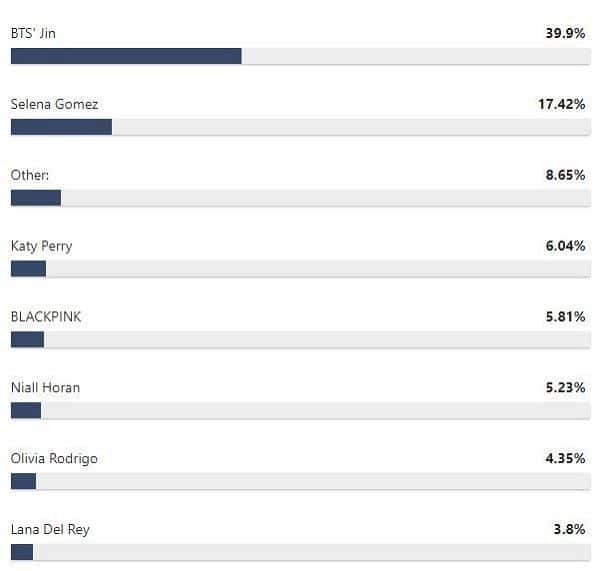 Well, we hope Taylor Swift and Jin will definitely come together after watching this poll result. The handsome boy has also been grabbing headlines for his collections of cars and has a huge collection of expensive SUVs. The singer has a Porsche Panamera GTS or Turbo and also owns a blue Lamborghini Aventador S. Also Read – BTS’ Jimin’s picture from latest photoshoot is all things ‘LOVE’ and we cannot keep calm

Recently while having a conversation with FilmDaily, Jin revealed how fame changed his life and said, “I haven’t changed, but my friends find it difficult to be around me. It’s quite a shame to see them grow apart from me. I’ve lost a lot of people around me. What makes up who I am now is our fans, ARMY, and they are the reason I’m able to do music. Because so many people love seeing me on stage and because I can make many people happy, I become happy through them. That’s why I perform even more.” Talking about his bond with BTS members, he added, “That’s how it is now but if we go our own ways later in the future, I hope we continue to see each other and spend time together often because we’re happy now when we’re together.”