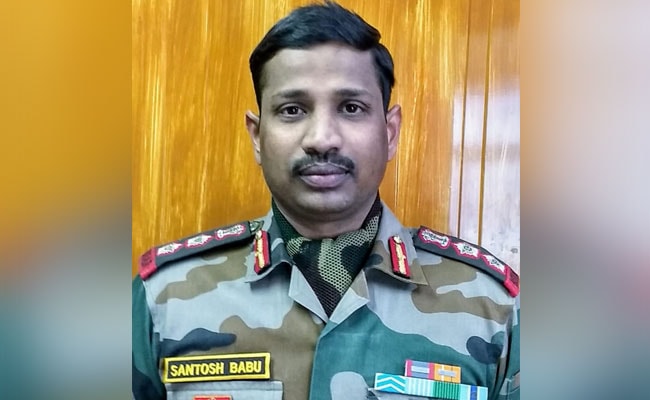 Colonel Santosh Babu: The army has built a memorial for the 20 soldiers (File)

Colonel Santosh Babu, who was among the 20 soldiers that died in the line of duty in brutal hand-to-hand combat with Chinese troops in eastern Ladakh’s Galwan Valley on June 15 last year, has been awarded with the second highest wartime gallantry honour, the Maha Vir Chakra, for showing “conspicuous bravery in face of enemy, exemplary leadership and astute professionalism.”

“Colonel Bikumalla Santosh Babu, Commanding Officer of 16 Bihar deployed in Galwan Valley (Eastern Ladakh) during Operation Snow Leopard, was tasked to establish an observation post in face of the enemy. Organising and briefing his troops about the situation with a sound plan, he successfully executed the task. While holding the position his column faced stiff resistance from the adversary who attacked using lethal and sharp weapons along with heavy stone pelting from adjoining heights,” his citation for the award read.

“Undaunted by the violent and aggressive action by overwhelming strength of enemy soldiers, the officer in true spirit of service before self, continued to resist the enemy’s attempt to pushback Indian troops. Despite being grievously injured, he led from the front with absolute command and control despite hostile conditions to deter the vicious enemy attack at his position,” it added.

The citation notes that the officer resisted the enemy attack till his last breath, inspiring troops to hold ground.

Subedar Sanjiv Kumar has been posthumously awarded with the Kirti Chakra, the peacetime equivalent of the Maha Vir Chakra.

Three soldiers have also been awarded with Shaurya Chakra, the peacetime equivalent of Vir Chakra.

Indian and Chinese troops have been engaged in a standoff in Ladakh since May last year. Currently some 50,000 Indian troops are deployed in a high state of combat readiness in mountainous locations in eastern Ladakh in sub-zero conditions. China reportedly has deployed equal number of troops.

India and China today held the ninth round of talks. The army, in a statement, said the talks were “positive, practical and constructive”.

Chinese and Indian Troops Clash at Their Disputed Border

An Organ Recital, With a Coronavirus Shot