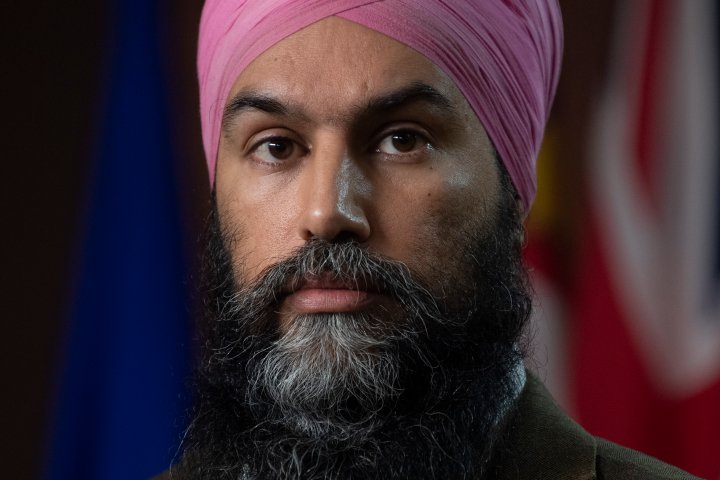 Prime Minister Justin Trudeau‘s response to multiple allegations of high-level sexual misconduct in the Canadian military adds to a “pattern of behaviour” when it comes to ignoring red flags and complaints, says NDP Leader Jagmeet Singh.

In an interview with The West Block‘s Mercedes Stephenson, Singh said the government’s lack of action in responding to the allegations about high-level appointees sends the message that women’s complaints and safety are not being taken seriously.

“Right now, the message being sent is a woman came forward – women came forward in different cases – with complaints, they made it to the desk of the defence minister, and nothing was done. This falls directly at the feet of the prime minister,” said Singh.

“So far, it looks like there’s a pattern of behaviour of ignoring sexual harassment or misconduct complaints – that women come forward, and nothing happens.”

“So far, the Liberal government’s sent the message they are not safe, and that’s wrong.”

READ MORE: Military facing ‘reckoning’ over misconduct but no details yet on action: Monsef

Days later, the military promised an independent review into misconduct within its ranks but shortly after that, Adm. Art McDonald stepped back from his role as chief of the defence staff following an allegation.

Multiple sources have told Global News the complaint is an allegation of sexual assault.

READ MORE: Trudeau says he did not personally know of 2018 Vance allegation

Trudeau said last week he was never made aware of one of the allegations against Vance, which was shared with his defence minister, Harjit Sajjan, in 2018. Sajjan’s chief of staff then shared it with Trudeau’s office and the staff at the Privy Council Office — the department supporting Trudeau’s office — have said they discussed the matter with officials in the Prime Minister’s Office.

Vance was appointed by the previous Conservative government but got a pay raise and term extension under Trudeau, while both McDonald and Vice-Adm. Haydn Edmundson were promoted to their current senior roles under the Trudeau government.

The web of revelations has led to questions about why no one appears to have acted on the allegations sooner, and why none of the people paid to advise Trudeau appear to have told him anything about a serious allegation against a senior appointee.

It is not the first time the government’s vetting and handling of allegations against senior appointee has come under scrutiny in recent months.

Former governor-general Julie Payette resigned in January following a scathing independent review into allegations of workplace bullying and abuse during her time at Rideau Hall.

READ MORE: From a ‘great adventure’ to resignation: The rise and fall of Julie Payette

Trudeau abandoned the use of an advisory panel normally used to select governors-general when he appointed Payette, a former astronaut and scientist. And his government appears not to have checked with several of Payette’s former employers about her workplace conduct.

CBC News has reported that Payette faced workplace conduct complaints dating back to the 1990s, and stemming from her time at the Canadian Space Agency, the Montreal Science Centre, and the Canadian Olympic Committee, including two internal investigations into her behaviour.

Trudeau has defended the vetting done on Payette, saying all procedures were followed but said in January that the government would look at what could be done to improve vetting of appointees.

The US Facing Persuading Reluctant Americans to Get Covid-19 Vaccine